"Gray hair is a crown of splendor; it is attained by a righteous life."~~ Proverbs 16:20 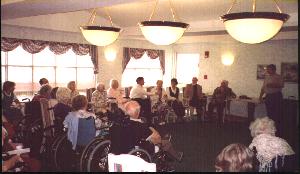 The Nursing Home Ministry started as a result of an interest shown by some of those in the Seniors Group. A service is held every other Sunday at the Martin Memorial South Restorative Care Center. Several of the seniors, as well as others in the congregation participate. Many in the center have an opportunity to sing some of their favorite hymns and hear from the Word. It is a privilege to minister to those who are in the autumn of their lives.

The group meets at 2:15 PM for prayer and the visit is usually from 2:30 to 3:30 PM. We meet in the activities room where usually 30-40 residents, family, and friends are in attendance. The informal worship service starts with prayer and lots of favorite songs with Ray Lucas providing music from the keyboard. During the service a short Christian devotion is read, followed by special music or singers, and then a short simple sermon message. The meeting ends with more music and a closing prayer. A typical Sunday Service is described below.

Details Of A Typical Sunday Service:

"Is not wisdom found among the aged? Does not long life bring understanding?"~~ Job 12:12